Dreams of Memory, Dreams of You: The Films of Philip K. Dick 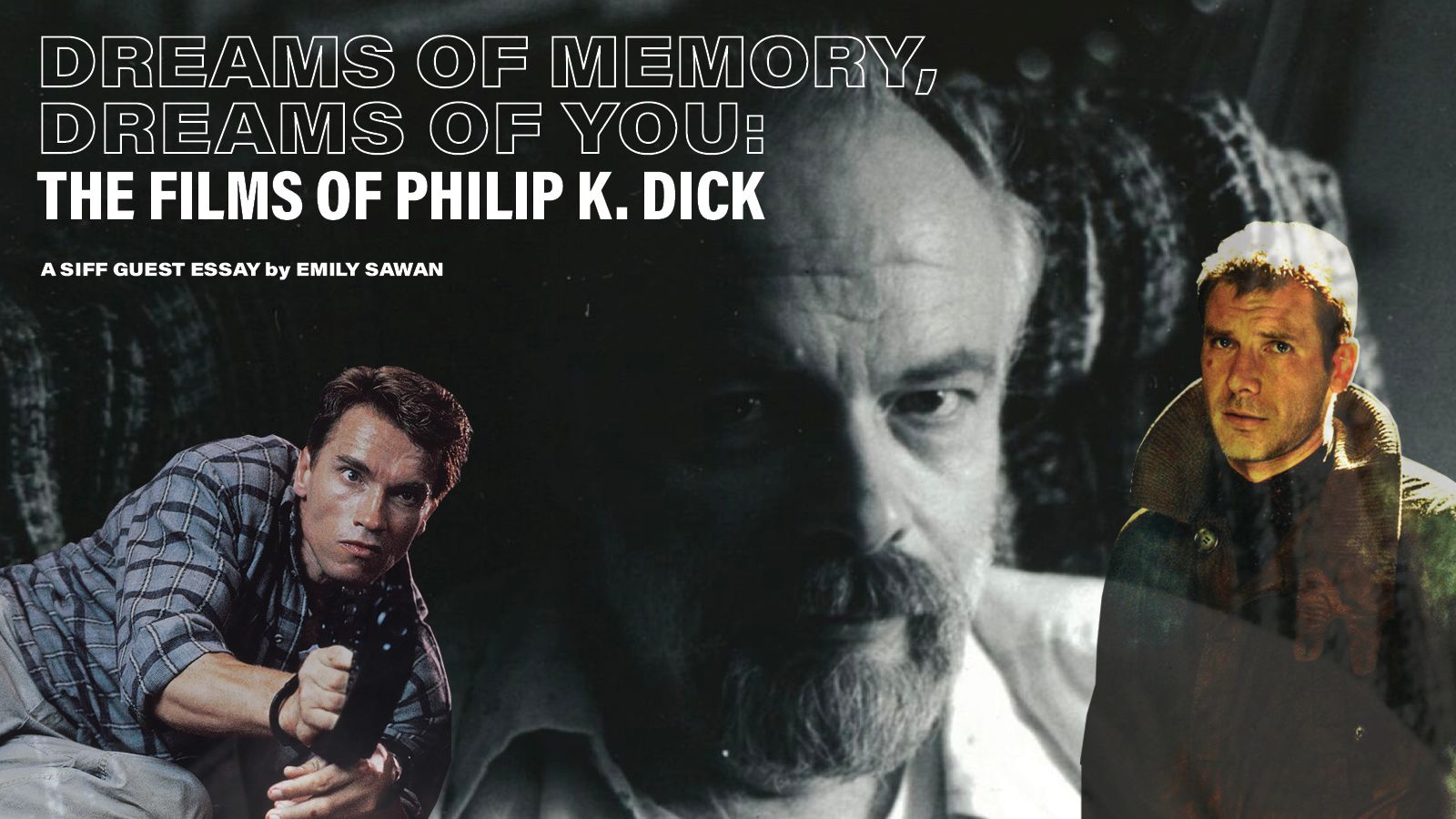 Philip K. Dick might be the biggest name in science fiction you’ve never heard of. Don’t believe me? Have you ever seen Blade Runner, Total Recall, or Minority Report? How about A Scanner Darkly, or The Adjustment Bureau?

With a publication history in the triple digits, Philip K. Dick was one of the most influential and innovative writers working during the later part of the Golden Age of Science Fiction. Today, his writing-turned-movies are part of our collective western cultural pastiche, tied into our references, our childhoods, and even into our baseline understanding of what science fiction can, and should, be.

Active from the 1950s—1980s, a notable figure in both science fiction and in postmodernism, his work covered everything from death and dying to the rise of the police state, artificial intelligence and climate change, to capitalism and the rise and ruse of consumerism. A mind before his time, many of his minor worldbuilding details have come to pass, and ring true today in eerie ways. (Recently noteworthy is the concept of having to pay for minor interactions that used to be understood as ‘free’—in one of his novels, the main character has to pay the door to his apartment in order to leave. Similar to the new packages that car companies have been releasing in order to access a variety of functions that should be free, no?) As prescient as some of his writing was, it’s also worth noting, however, that Philip K. Dick acutely suffered from the grasp of heteronormativity—while he has female characters throughout his works, sometimes even playing pivotal roles, they all are deeply tormented by the male gaze.

Unfortunately, Philip K. Dick died before seeing any of his work hit the silver screen, passing mere months before Blade Runner premiered. Since then, over thirty of his works have been transformed into film or television adaptations. Aside from the obvious cinematic flair, these works all have a certain level of ‘Philip K Dickiness’—he loved mind-melting themes about humanity and consciousness, and each of these works features heavy philosophical discussions of what it means to be human, the state of humanity, and what makes humankind special—if anything.

Two notable adaptations, featuring at SIFF, are Blade Runner—based on the novel, Do Androids Dream of Electric Sheep?—and Total Recall, which comes from the short story, “We Can Remember it For You Wholesale.”

Peeling back the layers of our psyche, what can we find? And what do we find? And what sits in the dark spot between that ‘can’ and that ‘do? How much of our self-imposed humanity is directly related to our own subjective experiences? How easy, or hard, is that to change? What does memory really mean, and how do memories make us human—or, when gifting human memories to nonhumans, what does it make them?

When memory becomes indistinguishable from reality, how does that change who we are? Does it matter if those memories are fake, or meant to deceive us into thinking we’re something we are not?

Memories extracted, memoires reframed, memories repressed, memories stolen. Memories gifted, memories taken, memories mistaken, memories changed. Our memories are an integral part of our mind, and if you can think of a way a memory can be played with, Philip K. Dick has written it. There’s something inherently romantic about the concept of memories as a focal point, as the way they make us who we are, and frame how we move through the world. When discussing the philosophical ramifications of humanity, memories and how they function seem like the obvious place to start.

In Blade Runner, memories are weaponized, used as both proof of being human, and as absolute proof of being nonhuman. The replicants aren’t even considered inhuman; they are subhuman slaves, and treated as such. This is true in both the film and the book, and in both cases the replicants are trying to actively escape a life of forced servitude, which is where Deckard as the ‘blade runner’ or bounty hunter, comes in.

The replicants are illegal androids that are, for all intents and purposes, identical to humans. What’s the one way they can be truly differentiated from humans? By a careful test that measures their emotional responses to a series of questions—many of which rely on memories to adequately answer. This is a theme more fully explored in the movie, as the tension between Harrison Ford and Sean Young is amplified by moody lighting and billowing smoke. The true test for humanity comes down to autonomic eye responses, and over one hundred questions—and even then, Harrison Ford is only certain when his suspicions are confirmed. Sean Young’s implanted memories ensure she doesn’t even know that she’s subhuman, although she has allegedly begun to suspect—once again, begging the question, how much of our humanity comes from our memories and how we interpret them?

In the book, while there is still tension between Ford and Young’s characters, it is nowhere near the level from the film. Instead, there’s a fascinating subplot about animals, and the social status that comes from owning an animal. In this too-near future, real animals are ridiculously expensive, coming with a monthly payment plan and requiring continual payments for upkeep. The flashier and more exotic the animal, the better. This has started a lucrative business for android animals– electric animals– that simulate the actions of a real animal, down to death and dying, all in an attempt to fool your neighbor. These electric animals allow you to put on the airs of society without having the money, and in a grim twist of fate, electric animals are welcomed whereas electric people are shunned. In a further, perhaps even more grim twist of fate, at several points characters fail to tell whether a creature is real, or created, questioning what it can matter if the subjective experience between two things is, for all other intents and purposes, absolutely identical.

Returning once more to the film, with all the controversy around the different Blade Runner cuts, the key tenement revolves around the question of memory implantation: is it being implied that Deckard is a replicant? Are people outside of his head, privy to his thoughts? If so, (and here’s the kicker:) does it matter, if we haven’t been able to tell the difference thus far?

In Total Recall, repressed memories change the entire understanding of who the main character is, and what he means to himself. The source story for this movie is nineteen pages long. Long enough to establish the premise, play with the idea of memory, and end with a classically mind-blowing “Dickiness” ending, but not long enough to explore the philosophical questions that having a pre- and post- memory self really bring up. The movie steps in and extrapolates this idea, pushing the thought of memory as foundationally changing, further. Schwarzenegger’s character effectively splits into two: himself pre-memory disruption, and himself post- memory disruption. The two sides frantically try to discuss across time, with his pre- and post- selves often at odds, often struggling to understand, and both trying to find a way to salvage who they are and what they’ve become. By questioning how much memory informs who we are, and these experiences into two very clear personas, the movie is able to more effectively explore the ramifications of memory on the self, and how we can change after a life shattering experience.

Unlike the ending of the short story, the ending of the movie is left purposefully ambiguous: was the entire adventure an implanted memory? Or did it all really happen after all? Here’s where Paul Verhoeven’s genius as a director truly shines as what the audience wants to happen becomes the most plausible outcome. Either ending interpretation is perfectly valid, as the movie provides hints and clues and supports for either one. However, much like memory is subjective, so, too, becomes this movie’s ending—what you choose to remember, or how you choose to interpret your last few hours, leads you to your preferred conclusion.

There is, still, that moment of ambiguous panic at the end of the story, although it requires a bit more legwork. Here we are left with an outside character looking in, the president of the company that changes memories. He’s watching the Schwarzenegger character equivalent, and reflecting on the impact of memory implantation—but more importantly, reveling in the fact that he’s likely soon to get an award himself, for potentially saving the human race. As he was quick to point out earlier in the piece, many of his clients come in wanting to feel important and special, like they’ve accomplished something grand. Could he just be a victim of a memory implant, the past events all made up to make him feel important, too?

Philip K. Dick teaches us that memory is both fallible and infallible, it separates us from anyone else, but also in the words of Deckard: “Everything is true. Everything anybody has ever thought.” And as I’d liked to add, ‘or remembered.’

Emily Sawan (she/they) is a writer, editor, teacher, and book artist. Emily studies the intersection between classic science fiction and capitalism, feminism, and disability. She is currently open for commissions, and you can contact them at emilyofthebird@gmail.com.