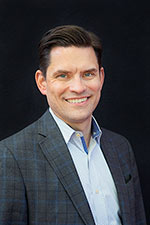 Haines has been Director of Marketing and Communications and a member of the leadership team at Seattle Rep since 2015. His responsibilities included leading the day-to-day promotion and communication of Seattle Rep's core mission and artistic programming and overseeing the 25-member marketing, communications, business operations, and patron experience departments. During his time there, he developed and implemented strategic initiatives that achieved three consecutive years of increased subscription sales, totaling 45% growth from FY16 to FY19.

Prior to his tenure at Seattle Rep, Haines worked for 10 years at Key Brand Entertainment (now called the John Gore Organization). He held several sales positions including, most recently, the Executive Director of the National Group Sales Division. In that role, he was responsible for more than $32 million of annual ticket sales.

"We are thrilled to have Andrew taking the position as SIFF's Executive Director," said Board President Lynn Hubbard. "With Andrew's customer experience and focus, he can lead SIFF in continuing to delight our audiences, while also introducing us to new audiences. Under Andrew's leadership, SIFF will continue bringing great films and events to the Puget Sound region."

"I'm looking forward to working with and learning from Andrew, who brings a wealth of experience to SIFF," said Beth Barrett, SIFF's Artistic Director. "We are so pleased to have a leader who has exciting new ideas about audience engagement and enhancing our ability to deliver our mission."

"I am honored to join SIFF, one of the preeminent film organizations in North America, as the next Executive Director," said Haines. "This is an exciting time for SIFF, and I look forward to collaborating with the staff and board to advance the mission, expand audiences, and deepen engagement within the community."

Founded in 1976, SIFF creates experiences that bring people together to discover extraordinary films from around the world with the Seattle International Film Festival, SIFF Cinema, and SIFF Education. Recognized as one of the top film festivals in North America, the Seattle International Film Festival is the longest, most highly attended film festival in the United States, reaching more than 140,000 annually. The 25-day festival is renowned for its wide-ranging and eclectic programming, presenting over 400 features, short films, and documentaries from over 80 countries each year. SIFF Cinema exhibits premiere theatrical releases, arthouse, international titles, and classic repertory film showings daily on five screens at the SIFF Cinema Uptown, SIFF Cinema Egyptian, and SIFF Film Center, reaching more than 150,000 attendees annually. SIFF Education offers educational programs for all audiences serving more than 8,000 students and youth in the community each year.